The FOP is a conservation NGO created with the aim of contributing to the study and conservation of the brown bear in Spain, its habitat and the cultural environment in which this endangered species grows. Since its creation in 1992, the FOP has been constantly expanding both the geographical scope of action, which currently covers almost the entire Cantabrian Mountains and the Pyrenees, as well as the scope and content of its conservation initiatives and projects.

Its work extends to fields such as the conservation and restoration of habitats of high interest to the species, the monitoring of the bear population, research applied to management, the fight against illegal poaching or environmental education and training.

The FOP maintains a scientific team made up of specialists in large carnivores and habitat studies who advise on lines of action and carry out research projects applied to management.

With a permanent presence in the Cantabrian and Pyrenean bear territory, the FOP has several Bear Patrols in operation, made up of women and men from the bear regions, who carry out irreplaceable field work with tasks ranging from monitoring and surveillance of the bear population, to support for research, education and awareness projects.

One of the objectives of the FOP is to encourage changes in attitudes and to facilitate the support and social participation necessary to successfully achieve the objectives of bear conservation. To this end, a communication, education, interpretation and environmental participation strategy has been designed for the FOP, in which educational campaigns are carried out in schools by a team of environmental educators and the distribution of information and training activities are promoted.

The headquarters of the FOP is in Santander, where the administrative and accounting areas are located, and the organization and planning work of the management and technical teams is centralized. There are also other offices spread throughout the Cantabrian Mountains and the Pyrenees, with the function of giving support to the activities of the FOP in the most important bear territories. The headquarters of the FOP in Asturias is located in the Natural Park of Somiedo (Asturias), in a house of Pola de Somiedo ceded by the City Council.

Also in Asturias, the FOP shares an office in Cangas del Narcea with the local hunting society. A third office is on the premises of the Villablino Town Hall, which is ceded by the town hall and facilitates the work of the FOP in the mining areas of Alto Sil in Leon. In the eastern Cantabrian zone, there are two houses in Verdeña (Cervera de Pisuerga, Palencia) owned by the FOP, which are the operational headquarters for developing the projects of the FOP in the Palencia Mountain. Finally, a house in Isil (Alt Àneu, Lleida) managed with the Decentralized Minor Entity of Isil and Alós d'Isil, which is the operational headquarters to develop the projects of the FOP in the Pyrenees of Lleida.

The FOP relies on the contribution of a multidisciplinary team of collaborators and contracted personnel responsible for carrying out its conservation activities and initiatives. Some of them come from the academic world and are mainly part of the FOP board of trustees and the scientific team, advising and guiding the basic lines of action.

Most of the team works directly in rural areas and in the natural environment where the life of the bears takes place, carrying out surveillance, research and environmental education tasks. The coordination of all these tasks is assumed by the management and technical teams that operate from the central office in Santander.

Our board of trustees, a representative and governing body, is made up of a group of professionals and researchers from different fields who provide a valuable multidisciplinary approach to the work strategies and decisions of the FOP.

LIFE PROJECTS: The FOP has coordinated or participated in 11 LIFE projects, and currently in 2019 coordinates two projects: LIFE Oso Courel and LIFE Natura 2000 + Oso, which will end in December 2020 and June 2020 respectively, and collaborates in another: PirosLife, which ends in October 2019.

LIFE Oso Courel: The general objective of the project is to favour long-term Cantabrian bear population viability promoting its expansion towards the southwest and its permanent establishment in the Serra do Courel (Lugo, Galicia), contributing in this way to the numerical and spatial expanding of the population and the reaching of a Favourable Conservation Status (FCS). Although Cantabrian bears are increasing their numbers, and connectivity between subpopulations is starting, there is little spatial expanding and both numerical and spatial increase are essential for reaching a FCS for the whole Cantabrian population, at the long-term and with enough ecological, demographic and genetic guarantees.

The specific objectives of the project are the following:

1) To favour permanent settlement of bears in a new territory, the Serra do Courel (Lugo, Galicia), improving trophic availability and guaranteeing connectivity between high quality habitats for bears.

2) To guarantee connectivity between main bear reproductive nucleus in the western Cantabrian subpopulation and the Serra do Courel.

3) To prevent and solve conflicts between bears and people coming from the new presence of bears in the Serra do Courel.

4) To increase information and awareness of local stakeholders and, in general, local population about the importance of the ongoing presence of bears.

LIFE Natura2000+Bear: The global objective of the project is to improve information and awareness about Natura 2000 and Brown bear between inhabitants of the bear areas of the two most small and endangered subpopulations in Spain, favour behavioural changes and promote gobernance structures for a better conservation of Natura 2000 sites and endangered bear subpopulations. The project is established around a double strategy: Natura 2000 and brown bear, considering that information and governance are part of the process to avoid the deterioration of natural habitats of species in Natura 2000 and to improve conservation status of brown bear, currently unfavorable.

1.- Involve diferent population groups, promoting knowledge and awareness about Natura 2000 and brown bear, their values and opportunities for sustainable development, disseminating information at different levels and involving stakeholders leaders so they could act as multipliers. Impact indicators: results of the pre and post-project social surveys developed in the local population and number of multipliers involved and their involvement degree, measured with surveys at the beginning and the end.

2.- Contribute to avoid deterioration of natural habitats in Natura 2000 and to improve the unfavourable conservation status of brown bear increasing information of public and private local actors, potential promoters of plans and projects under Habitat Directive article 6. Impact indicator: changes in perception from plan and project promotors based in surveys at the begining and the end.

3.- Offer the inhabitants, specific population groups and NGO enough opportunities for active participation in relevant aspects of the Natura 2000 network in bear areas, facilitating sharing of solutions and best practices, creating governance structures and generating lasting favourable public opinion. Impact indicator: percentage of people involved in social participation activities related with Natura 2000 and bear and their level of involvement, based in surveys.

HUELLA PROGRAM: Since the beginning of the FOP, an Educational Program was launched that has reached several generations of schoolchildren in the Cantabrian Mountains, with storytellers and workshops for children, and didactic routes to know the Country of the Bears. Currently, the program contains practical tools, didactic materials and activities aimed at both teachers and schoolchildren. To date, more than 82,000 schoolchildren have been reached throughout the Cantabrian Mountains.

OSO PATROL PROJECT: The FOP maintains Oso Patrols in the most important bear areas of the Cantabrian Mountains and Pyrenees. They are made up of women and men from the bear territories.

The tasks of the patrols range from surveillance and monitoring of bear populations, to support for research programs, environmental education or orientation of visitors in protected natural areas.

To date, more than 15,000 bear data sheets have been collected throughout the Cantabrian Mountains and more than 1,500 illegal traps have been removed.

URSUS PROGRAMME: A good knowledge base is essential for developing effective conservation strategies. For this reason, FOP technicians and scientists carry out various research projects on habitat characterisation and population monitoring of brown bears, genetic studies, analysis of bear behaviour with cubs, human dimensions related to the bear, monitoring of indicators of the effects of climate change on biodiversity in the mountains inhabited by the bear, etc.

HABITAT PROGRAMME: Includes all actions and projects aimed at reducing impacts and improving coverage and feeding conditions in bear areas. Work is also being done to guarantee connectivity between populations and breeding groups by developing measures to facilitate the flow of specimens for the necessary genetic exchange. To date, several HABITAT projects have been developed throughout the Cantabrian Mountains and the Pyrenees, adding up to date more than 177,000 trees and shrubs of osero interest planted.

COEX: Cohabitation has been the key to this recovery of the brown bear and this is based on preventing conflicts and compensating for damages. The FOP carries out conflict prevention measures and has also carried out sustainable and responsible bear tourism projects. To date, more than 1,700 electric fences have been distributed to prevent bear damage throughout the Cantabrian Mountains.

The LIFE Bear Defragmentation project started in 2013 with the aim of ensuring the long-term viability of the Cantabrian bear population by improving connectivity in the southern zone of the interpopulation corridor between the two Cantabrian bear settlements to facilitate genetic and demographic exchange between them. This project is the natural continuity of the previous LIFE Bear Corridors project, developed by the FOP between 2009 and 2012 and which was awarded by the European Commission as one of the best LIFE Nature projects in 2012. This previous project was mainly concerned with improving the social scenario and the perception of the bear in the territory between the two bear settlements, a space in which the species has been absent for a long time. Once the work of awareness and information of the social agents of the territory had begun, the LIFE Bear Defragmentation was directed towards the implementation of concrete actions to improve connectivity, the results of which were:

- 8 Collaboration agreements with the town councils of the area, 13 agreements of custody of the territory for the development of the plantations and 9 local social entities collaborating in the project.

- 95,242 autochthonous trees and shrubs planted in 237 connectivity and shielding groves scattered along the interpopulation corridor.

- 12.3 ha of habitat restoration to improve shrub formations of interest to the brown bear.

- 23.9 ha in 17 properties acquired in the corridor for planting with connectivity forests.

- 23 meetings with more than 150 livestock farmers, beekeepers, hunters and economic and social agents to promote information on the bear.

- 28 educational activities (workshops, storytelling, talks and routes) for 1,038 schoolchildren from all the educational centres in the inter-population corridor.

- 6 volunteer activities with 296 participants for planting, collecting seeds and visiting groves, and 18 seminars and debates in municipalities of the corridor.

- 20,000 copies of a special bulletin on the LIFE Project published in Quercus magazine, 5,000 leaflets and other informative materials (didactic notebooks, stickers, T-shirts, etc.) distributed by the corridor and 6 newsletters distributed through the web and social networks.

Beneficiaries
Local community
Others
Have you previously hosted an intern? Is it a possibility in your organisation? 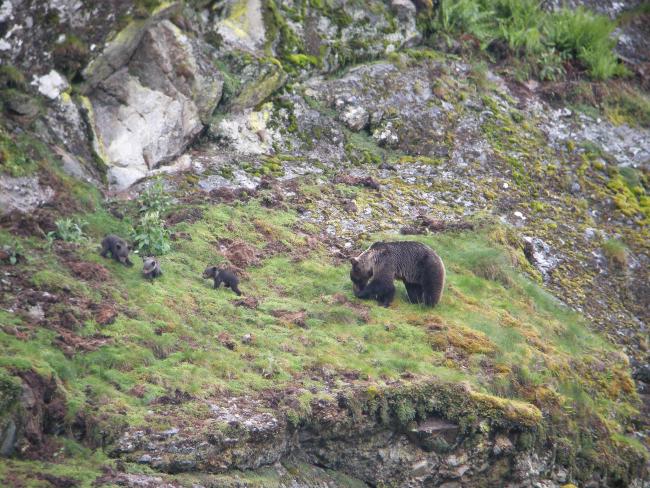 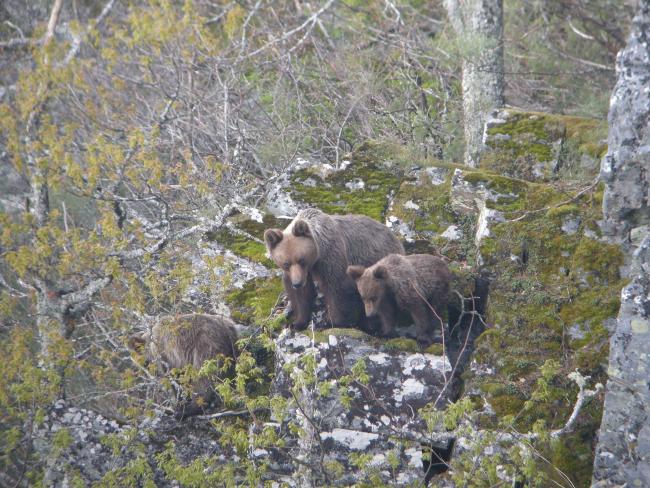